Vertebrae in Poetry Wales’ Books of 2019

Poetry Wales asked a collection of recent and future contributors to Poetry Wales to recommend their favourite poetry titles of 2019. Vertebrae was nominated twice in the prestigious roll call. 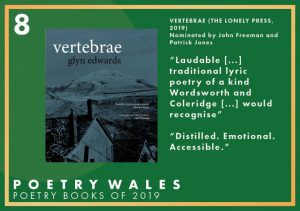 In his debut collection Vertebrae (The Lonely Press), Glyn Edwards channels a number of his predecessors from Shakespeare to Ted Hughes and adds his own sharp observation, emotional truth and gift for language to the mix, making everything his own. The bedrock of this collection is a tenderness grounded in empathy, starting with close family, and bringing that warmth and openness to other sentient beings, human and animal, past and present. The poems of the natural world empower the reader with the poet’s ability to see with clarity and steadiness. In an entirely laudable sense this is traditional lyric poetry of a kind Wordsworth and Coleridge as well as many of the twentieth-century greats would recognise. 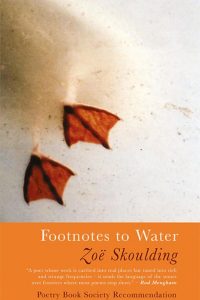 My own nomination was for Zoe Shoulding’s Footnotes to Water:

I’ve barely begun Zoë Skoulding’s Footnotes to Water (https://www.serenbooks.com/productdisplay/footnotes-water) but, having been hypnotised by hearing her recently read aloud from the new Seren collection, I am already enjoying the anthology as much as anything else I’ve read this year.

The opening poem ‘Adda’ is a stream of seven sonnets seeking out the peripheral, subterranean river in Bangor, ultimately concluding ‘no answer’ other than the ‘edges’ where the ‘pressure comes from.’ Skoulding is heavily motivated by the principles of phonology of verse and Footnotes to Water thrives for her adeptness with assonance and cacophony, with code-switching in and out of Cymraeg; she is always ‘listening’ to liquid, always pursuing the sound of it ‘escaping.’