Remember the snows before Easter? The storms personified with cousins’ names? In a spring that seems an age ago now, I accepted a series of invitations to read at literary festivals.  They seemed so far into the future, that despite advising everyone on Twitter and Facebook to ‘tattoo the dates’ on their forearms, I didn’t plot the events on the kitchen calendar myself.  So it was that July became the month my wife now refers to as ‘three readings and a house move’ and that kitchen calendar is somewhere in a box-fort in the shed. 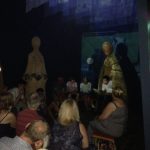 The RS Thomas festival in Aberdaron, I discovered too late, had clashed with the Terry Hetherington Awards Prize at the Dylan Thomas Centre in Swansea and the launch of Cheval 11, which I had co-edited with Rose Widlake.  Fortunately, getting to Swansea on a Friday night from North Wales, is as notoriously difficult as getting a fixed moving-in date from a buyer’s solicitors, so I was excused the odyssey to South Wales by the founder Aida Birch, and encouraged to drive West Walesward to deliver a talk on the many guises of ‘Iago Prytherch’.  Or, more to the point, the many interpretations of Iago Prytherch according to the many guises of RS Thomas.

Susan Forgerty had organised a weekend of activities celebrating the life and work of Thomas and his wife, the artist, Mildred Eldridge.  My own reading, for which the gallery space in the National Trust Centre at Porth-y-Swnt was uncomfortably warm and uncomfortably full, was a rewarding and fulfilling hour.  As well as sharing my own poems and revealing how they were inspired by the RS Thomas I’d been force-fed at school, spoon-fed at university and has been cluster-feeding on thereafter.  I was fortunate to hear work read by poets in the audience and, most special of all, had the opportunity to listen to Jack Rendell read his poems from Cheval 11.  Having had anecdotes about hedgehogs and moles exchanged on the night, it was a perplexing Saturday morning to encounter both animals on our journey home.  The hedgehog, curled in my son’s unbelieving hands like a dragon’s egg; the mole with his paddling paws and sleepshut eyes.

At Lit Caerleon, seven days later, our solicitor was on holiday and the house move was still to be finalised.  So, my wife and I travelled to Newport, abandoning the empty boxes in the hallway, where we were greeted into the event marquee by the most welcoming of hugs from Rajvi Glasbrook, who, along with her husband Jon and a committee of benevolent literature-aholics organise Wales’ most intimate of festivals.  After my own reading, I spent a few wonderful hours in the company of writers and poets and readers and met a cast of names that Twitter had made me feel were as friends: Tony Curtis, Mab Jones, Murray Lachlan Young, Natalie Holborrow, Joao Morais, Dan Tyte.  I met another talented poet from the Terry Hetherington Award, Niall Ivin, and revelled in the conversation between Gary Raymond, Craig Austin and Patrick Mcguinness.  Their pertinent debate about being unable to witness history as it happens about you, yet being compelled to reflect on in art reminded me of two A-Level years of dismayed notetaking about the Corn Laws, and to question whether Brexit will be more astonishing for students in two hundred years than it is presently.  Everybody was having too much fun to tell me that the roads would be closed until midday the next day for a cycle race I’d never heard of.
And then we moved house. 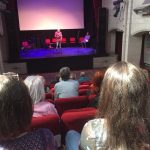 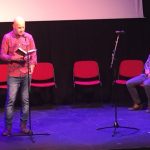 Subsequently, I travelled alone last weekend to Holyhead to read at the Gwyl Cybi Festival in the Ucheldre Centre while my wife waved a wallpaper steamer in goodbye at me as I challenged the summerholidaycaravantailbacks of the A55.  Having judged the poetry competition for the events, together with Manon Ros, I was eager to translate the anonymous entries into real faces and accents.  Vanessa Owen and Karen Ankers had assembled a line-up of local singers and poets and had encouraged applicants from across Wales and Northern England to attend to read their verse.   Martin Daws read an memorable, impassioned ode to Bethesda, James Lloyd read two poems from Cheval 11, and a breathless Matthew Smith arrived from his Swansea-origin in time to announce: his first time in North Wales; first time camping; first time entering a poetry a poetry competition, and, as I was about to discover, hearing the poem I’d selected as the winner being read aloud in a hopeful but unknowing voice; first time winning a competition.

When I got home, my wife had pulled the wallpaper from the living room and exposed the names of the former incumbents on the walls.  The following day, a tourist stopped outside and, brittle as old paper, wound his way up the short, steep drive.  He revealed how he’d lived here when the house was first built and how the signature on one of the walls was his.
Having enjoyed a month of hearing others’ poetry, I felt a new poem had just announced itself at my new front door.